“To discover the depth and beauty of extra virgin olive oil is to unravel thousands of years of history through a unique tour of the senses.” 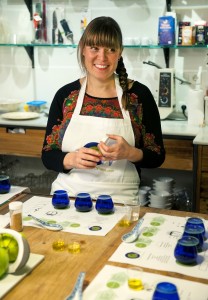 Alexis Kerner is a born foodie originally from New Jersey and has been residing in and exploring Andalusia for over 12 years.

She received her BA degree in Environmental Science from Connecticut College and the title as Professional Olive Oil Taster from the University of Jaen and the International Olive Council.

Alexis always had an interest in olive oil, but it wasn’t until the first course in tasting that she truly fell pit, peel, and lenticel for all there is to know about olive oil. It was from this moment that she became inspired to share the knowledge and joy of olive oil with others.

She has more than 16 years of experience in environmental programming in the United States and Spain as well as on a European level.

During her employment in the Andalusian Government she learned the intricate ins and outs of Andalusia´s farms and olive oil mills and was given a unique window into this world.

Alexis also has 15 years of experience in imparting workshops and master courses for tourism and environmental agencies as well as olive oil producers.

She also serves on the jury for the  OVIBEJA International Extra Virgin Olive Oil Competition in Portugal and TERRAOLIVO Competition in Jerusalem, Israel.

Alexis has achieved high tasting ability scores and is on the list of Associate Savants.

The most common breakfast in Andalusia is, “Aceite y Tomate”, Olive oil and tomato. However, there are many variations to the theme and there is a definite art to ordering this breakfast in an Andalusian bar. The dance goes something like this: “Give me a half a village bread with tomato and oil”. Then the […]

There is more to just cold soups of Spain than gazpacho. You can find fresh soups around Spain that use strawberries, watermelon, beets, cherries and even almonds. I have decided to play on a modern favorite, apple and arugala salmorejo. Salmorejo is much like gazpacho but is thicker and has less ingredients. A traditional salmorejo […]

It is Purim! The fun Jewish, carnival holiday of drinking, costumes and making noise. For most Jews, Purim would not be the same without the fabulous cookie known as the hamentashen, Although Sephardic Jews do not make hamentashen they do make other pastries like tea cookies and the ear of Hamen, known as pestiños […]